Our home, and your starting point. Nature has granted the Maltese Islands an excellent strategic point, right at the very centre of the Mediterranean. Replete with outstanding beaches, diving sites, killer cuisine and a long and colourful history, the Maltese Islands are an innocuous but magnetic hot spot for the yachting community. The main island’s selection of marinas and harbours are second to none, and this tropical paradise in the middle of the Med boasts incredible weather almost 365 days a year. Read on to find out what Malta can offer your charter.
Malta

Il-Ħofra – Il-Ħofra is a beautiful bay on the south east of Malta. Split into two bays, you may anchor in either one, although the right-hand bay is the preferred anchorage spot. Il-Ħofra boasts crystal clear waters and is surrounded by cliffs, one of which has an impressive hole that looks through to the other bay. This spot is relatively quiet throughout the year, without any tourist boats berthing here or anywhere in the vicinity.

St Peter’s Pool – A popular bay with both locals and tourists during the Summer, St Peter’s Pool is a small secluded spot further towards the south of Malta, surrounded by low level cliffs and rocks. Anchorage is only possible outside of the bay, and it can be a challenging area due to passing boats. Nonetheless, the water is crystal clear, and a swimming zone is usually set up during the summer months.

Kalanka Bay (Delimara) – This beautiful gem of a bay lies in the south of Malta, just before Marsaxlokk Harbour. This is a rather exclusive spot due to its limited size, and anchorage is only possible at off-peak hours.

Pretty Bay (Marsaxlokk Harbour) – Pretty Bay is one of the furthest points in to Marsaxlokk Harbour itself, and a popular destination with locals and tourists during the summer months. The bay has wonderful clear water which is ideal for swimming, while the town itself has a number of bars and restaurants.

Marsamxett Harbour – Marsamxett Harbour is on the north side of Valletta, in between the Valletta peninsula and Sliema. There’s plenty to see in this area, with an excellent anchorage area by the Ta’ Xbiex Yacht Club, and a spectacular view of Valletta from across the water. As it’s an area that is deep and busy with boat traffic, it’s not an ideal spot for swimming.

The Grand Harbour – The majestic Grand Harbour is steeped in history, and is one of the most striking harbours in Malta’s portfolio. There are three fortifications that surround the harbour, which had been purposely built in the 16th century by the Order of St John. Rinella is the harbour’s main anchorage, which is well protected and often calm with relatively clear waters.

Xlendi Bay – With a cluster of top-notch restaurants offering the freshest locally sourced ingredients and traditional recipes, Xlendi Bay ought to be one of your first port of calls in Gozo. The main bay is formed by a rugged cliff alongside a minute sandy landing that takes you up to the main square, where you can sip on an Aperol Spritz or two after a snorkelling session in the neighbouring inlet of Xlendi Grotto. This is a serene valley of sorts that features more of Gozo’s robust cliffs and greenery. This part of the bay is a magnet for watersport and diving enthusiasts due to its underwater reef formations.

Daħlet Qorrot – This picturesque bay boasts some of Gozo’s clearest and cleanest waters, with its fishing history literally carved into its limestone. You’ll notice several boat houses of old which were used by fishermen in the past to seek shelter, as well as some lovely shallow parts with the most organic marine life you’ll ever come across. Right by Daħlet Qorrot is San Filep, a highly photogenic beach formed of smooth rocks and crystal waters. Although this is a swimming hotspot, the area is quite remote and lacks basic facilities, so you might want to pack food and essentials for your trip.

Ramla Bay – A top favourite among Gozitans and Maltese visitors, Ramla Bay is known for its terracotta sands and green pastures. You can enjoy some of the cleanest waters here, as well as a constant but gentle breeze during your stay. Ramla Bay is very popular among lovers of watersports, and there is a convivial vibe aboard banana rides, surfboards and jet skis during peak season. The beach itself also features a few beach clubs and diners.

Mġarr ix-Xini – We’d like to think Mġarr ix-Xini is the mother of Gozitan tranquillity. Marvel at the lush green cliffs in contrast to the pebbled shore of this secluded inlet, as well as its rich marine life once you dive underneath its cerulean surface. Mġarr ix-Xini had a hotly-anticipated cameo in Brangelina’s By The Sea back in 2015, and there’s no denying its star quality. It’s a predominantly pebbled bay within a steep valley to the West of Mġarr Harbour, just a stone’s throw away from ix-Xatt l-Aħmar. From this point all the way to Mġarr ix-Xini, the shore and its waters are a mecca of marine life.

Ix-Xatt l-Aħmar – Right behind Mġarr Harbour is ix-Xatt l-Aħmar, another tranquil bay featuring salt pans and a golden red hue across its cliffs. Xatt l-Aħmar has been attracting divers since 1999, when the MV Xlendi – an 80m roll-on roll-off ferry – was scuttled just off the coast to help form an artificial reef in this area. There are two other wrecks – MV Karwela and MV Cominoland – not far from the bay. Just up the road is the village of Għajnsielem, just five minutes away from Gozo’s harbour hub.

The third largest island in the archipelago, Comino is an uninhabited and car-free island replete with wild thyme, and bays so beautiful you’d think they were mirages. As it’s only 3.5Km², Comino attracts both divers and ramblers alike, and it is a haven for locals and tourists to be one with nature for a few hours; a deserted island experience for beginners, and a mecca for divers. There’s only one hotel on the island, and people primarily flock to experience the world-famous Blue Lagoon. There are no marinas or harbours on Comino, so your charter will be anchor-based around this island.

Blue Lagoon – You certainly can’t miss the main event. With its crystal-clear turquoise waters, the Blue Lagoon is one of the archipelago’s most popular tourist destinations. Renowned as a swimming and snorkelling hot spot with its spectacular underwater views, the Blue Lagoon is an ideal anchorage for people who don’t mind a busy area.

Crystal Lagoon – A picturesque bay with high cliffs and caves, the Crystal Lagoon lies on the west coast of Comino. This more off-the-beaten-track location is only accessible by boat, and therefore promises less crowds than the Blue Lagoon.

Santa Maria – Santa Maria is a quieter bay on the north coast of Comino, featuring shallower waters, a beach with a café, and the revered Santa Maria caves. This is an incredible bay for snorkelling, and the caves can be accessed using a tender or jet ski. It can get rather busy at the weekend, especially during the high season.

San Niklaw – Also known as St Nicholas Bay, San Niklaw is located on the north coast of Comino, and is one of the quieter bays. It has some areas of clear waters, and it also has ideal access to an inlet located next to the bay itself, which is superb for swimming and snorkelling. The Comino Hotel is situated by this bay, with a ferry boat servicing the area.

St Paul’s Island – St Paul’s Island is on the east coast of Malta, and lies about half way to Comino. The island has an anchorage on the south side, with the omniscient statue of St Paul – erected in the middle of the 19th century – watching over the landscape. 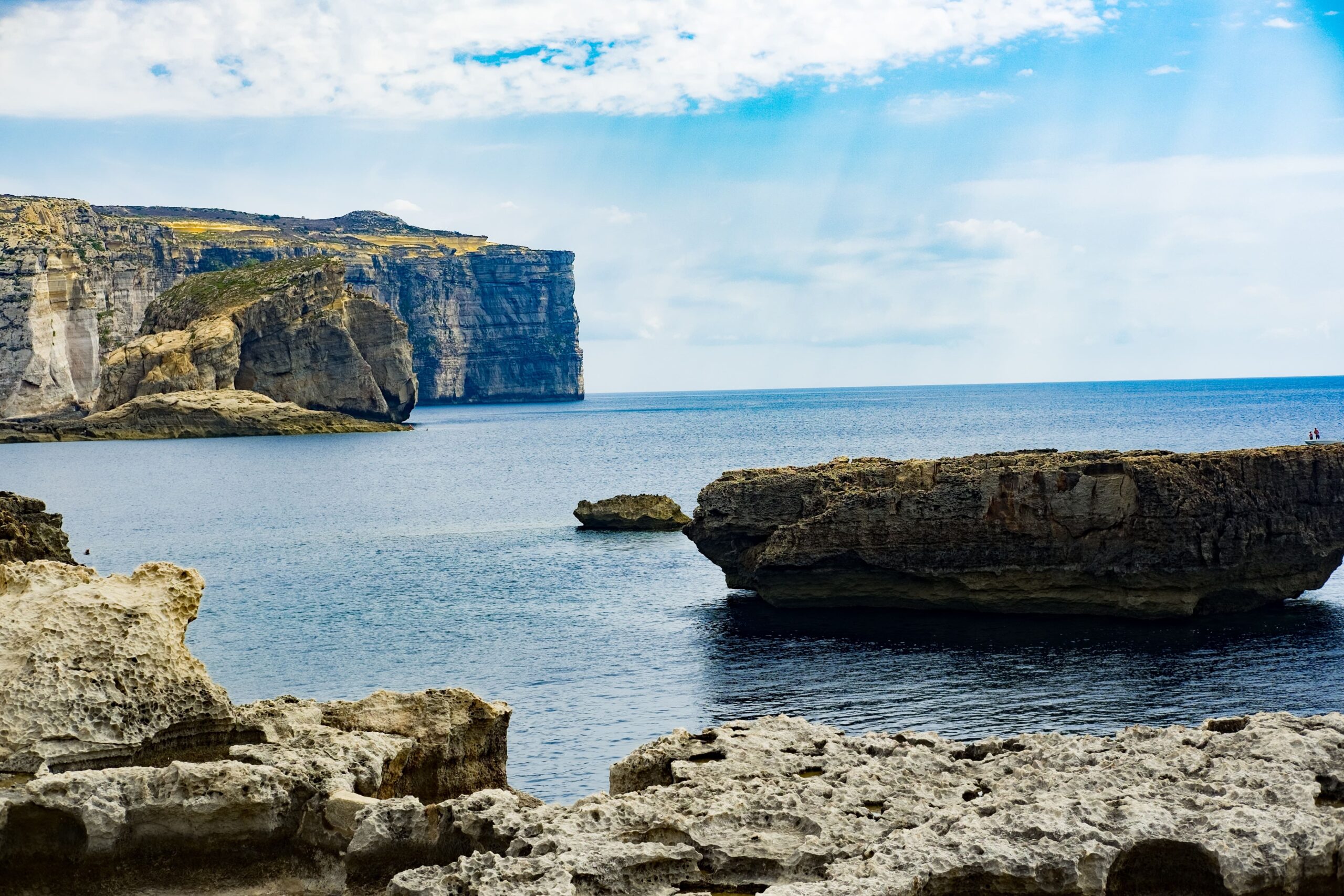