Let us know when you would like to charter and we will give you some incredible options on destinations and the right yachts to take you there. Below are some of the most sought after destinations in the Eastern Mediterranean.
Croatia - The Dalmatian Coast

The Dalmatian Riviera is a coastline of geographical theatre. It is a splendorous stretch of azure water, jade green islands and landscapes, terracotta rooftops and pine-strewn shores, all under a Mediterranean sun. It is where Croatian countryside envelopes its coast’s port towns, and contrasts with its sparkling beaches. This magical place – for there is no better word to describe this part of the world – is on the western edge of Croatia in the Adriatic Sea, looking directly opposite the eastern shores of Italy. There is nothing uniform in its geography, as it is peppered with a multitude of islands and highly uneven spits of land and jagged coastlines, rendering it an ideal location for the adventurous yachter who’s willing to see their vessel in action.

From the Bay of Kotor all the way up to Zadar, you’ll encounter the charming cities of Dubrovnik, Sibenik and Split, now established yachting hubs for high-end individuals who are in search of a more bohemian vibe and a hint of forest to go with their beach days. Despite its medieval feel which had earned it its recurring role in Games of Thrones, the Dalmatian Coast knows how to cater for the contemporary. The area is resplendent with tasteful beach clubs and luxury boutique hotels to complement your yacht life, all of which do not compromise its classic feel of antiquity. You also cannot miss out on the country’s envious number of ethereal UNESCO-classified national parks, featuring tumbling waterfalls and acres of hiking spots.

This generous spit of land is around 68Km worth of agricultural wealth, thanks to its fresh water springs and bountiful weather. Its fertile land has blessed the area with its iconic lavender fields, olive groves, vineyards, pine forests and fruit orchards, a rarity indeed for a coastal island. For such a small radius, this island has a wealth of architecture, history and natural phenomena to enjoy. The Croatians have capitalised on water sports and nautical activities across the area, and you’ll encounter as many of your superyacht peers as you will panoramic views when cruising around the perimeter. There are around 5 top-level marinas, and plenty of restaurants where you can experience Croatian delicacies within an elegant ambience.

Old-world charm meets riviera glamour here. The Makarska Riviera is a stretch of 60km worth of coast, between the towns of Brela and Gradac. This is without a doubt the Dalmatian Coast’s most touristy hotspot, with some of the most Instagrammable beaches you’ll ever come across, and the cleanest waters you’ll ever immerse yourself in. For an extra dose of natural wonder, the area offers the imposing Biokovo Mountain, which gazes down upon you as you cruise across the shore aboard your Sunseeker. Indulge in a spot of kayaking along the area’s perimeter, or ascend to the Biokovo Skywalk to experience the ultimate panorama of the Adriatic Sea.

Contemporary urban vibes pulsate through these streets of antiquity. Split is a UNESCO World Heritage Site, and is the largest city along the Dalmatian Coast. Its medieval architecture and solid remnants of the past are impeccably preserved, but also kept alive through the people’s culture of coffee shop life and wine bar soirées. The Roman Emperor Diocletian resided here in the third century, so if it was good enough for him, it’s certainly good enough for you. The people of Split value good living and good company above all else; you’ll note their appreciation for Mediterranean produce. As if Split doesn’t offer enough, they also have the lush Marjan Forest Park that touches the water’s edge.

Dubrovnik didn’t really need Game of Thrones to put it on the map, but it certainly helped. You’ll encounter plenty of bars and cafes across this ancient city and its fortifications, and the water is never too far away, whichever point you’re at. The city features some humbling structures, such as the Dubrovnik Cathedral, the immaculate Sponza Palace, and the silky limestone paving of Stradun. This city will undoubtedly leave you in awe, whether you’re cruising past it or roaming its history-laden streets.

Cruise towards acres upon acres of pristine shores adorned with the lush greenery of the eastern Mediterranean. Across these seven islands which watch over the West Grecian coast, you’ll find a yachting haven that has for years drawn in the boating community and those who subconsciously worship Poseidon. This is where Grecian living meets Italian style, as is evident from the Venetian architecture found across the region, dating back to Medieval times. This gathering of archipelagos is a hub for yachters who are looking for the ultimate Greek holiday, where they can experience some of the best cultivated wines in the Mediterranean, or enjoy a round of golf in Corfu.

There isn’t a corner in Corfu that doesn’t speak volumes about its historic trajectory. This great island of antiquity is a main player in Greek history, and its cosmopolitan past has left its mark over the years, showcasing a multicultural heritage that has shaped it into the Mediterranean hot spot that it is today. The Old Town of Corfu is a jaw-dropping wonder in its own right, where remnants of the Classical, Baroque and Renaissance periods are still proudly standing. The entirety of the island features some of the most impressive churches and museums, as well as two magnificent fortresses which can be seen from onboard your Sunseeker.

Corfu has a list of leisurely activities for you to indulge in, and the community certainly knows how to provide for the discerning traveller. The island is passionate about its food culture, and they are proud to offer only the very best quality of Greek delicacies. Corfu is teeming with outstanding restaurants for you to try out, and it certainly is the spot for you to regenerate the body and stimulate the senses. In the meantime, there are plenty of food and wine tours available across the island, allowing you to savour the renowned flavours of this part of the world. Be sure to dip your toes into the sands of their spotless beaches, especially the mesmerising Paleokastritsa and its emerald hue.

Legend has it that Poseidon had formed this duo of islands by striking the tip of Corfu with his trident, in order for him and Amphitrite to have somewhere to get away from it all. Not a bad choice of land, to say the least. Paxos and Antipaxos are two verdant islands with remarkable swimming spots and serene fishing villages. It is highly recommended that you first take in the beauty of these islands by circumnavigating their perimeters, beholding their coastal beauty and preserved natural resources. This part of the Ionian Islands is a yachting mecca, where all that is required of you is to immerse yourself in nature, people-watch in one of the fishing villages at a bar or a café, and swim to your heart’s content.

This mythically peaceful respite features Gaios, one of the most incredible harbours in the Mediterranean, and the largest town in Paxos. This quaint little spot proudly features Venetian architecture and meandering side streets, with charming restaurants and bars at almost every corner. You won’t come here to party (the island only has the one nightclub) but you will gorge on traditional Greek dishes such as souvlaki, a few swigs of ouzo, and feta coated in honey. All of this is enhanced with a drizzle of top-quality Greek olive oil, sourced from the heady olive groves on the island.

Let your Sunseeker charter edge you closer to the numerous sea caves carved into Paxos rock, and once you’re done with this part of the archipelago, cruise over to Antipaxos for some seriously blue waters. This smaller island features a concentration of fabulous swimming spots, the majority of which have a crisp white surface of large smooth pebbles, but you’ll be able to come across a sandy beach or two, such as the beautiful Vrika Beach. Antipaxos is ideal for a long walk through nature, as well as a good snorkelling session in the shallow waters around the coast.

Film and literary buffs may know Cephalonia as the setting for Louis de Bernières’ Captain Corelli’s Mandolin. This mountainous island features Mount Aenos, one of the highest peaks in the Mediterranean. Be sure to circle around the perimeter onboard your Sunseeker to take in the skyline, and prepare yourself to explore some of the most magical coastal formations and natural wonders. Two such examples are Myrtos Cave on the glorious Myrtos Beach, and the wondrous Melissani Cave right by the seaside town of Sami.

A site of great natural importance is Kaminia Beach, where a great number of loggerhead turtles come to nest. Cephalonia follows the seaside town aesthetic to the letter, with colourful boathouses brightening up the many bays around the coast. The village of Assos is a prime example, and a contrasting fortification built by the Venetians lies on the spit of land opposite.

Right opposite Cephalonia lies Ithaca, a yachter’s paradise. With a coast that is resplendent with pure shores and sublime coves, Ithaca is only accessible by boat, and once you’re ashore, you’ll be spoilt for choice when it comes to unadulterated beaches and a good hike through the island’s green pastures.

Lefkada is a relatively large island that is connected to the mainland of Greece by a causeway. Often dubbed as the Caribbean of Greece, Lefkada boasts some incredible crystal-clear beaches, stunning places of worship, and even waterfalls. There’s certainly a lot more going on in Lefkada than there is in Cephalonia, and the three main villages have quite a few eateries and bars to choose from. There’s a clubbing scene in Nydri, as well as some stylish lounge bars around the port of Lefkada Town.

The island has also developed a water-sporting culture, and you can partake in some exhilarating windsurfing and kite surfing, thanks to Lefkadas’ favourable winds. We cannot also stress how breath-taking the beaches are on this island. Notable mentions are Porto Katsiki, Mylos, Kathisma and Kalamitsi, all of which are long stretches of sand and pebbles, merged with clean diamond blue sea.

Further south to all of the other main islands of the Ionian is Zante, possibly one of the most developed of the archipelagos that caters to a more vibrant way of living in terms of island life. In the spirit of Dionysius, there is an abundance of fun things to do on Zante, from cave exploration to wining and dining at luxury hotels, to visiting one of the most photographed beaches in the world. Zante is home to Navagio Beach, where the MV Panagiotis had run aground in 1980. The wreck is still there, contributing to the cove’s cinematic atmosphere, and it was voted the world’s best beach in 2018. Aside from Navagio, there is literally a new beach for every day of your holiday on Zante, as well as bamboo-decorated beach bars and cafes where you can lie back and watch the world go by. 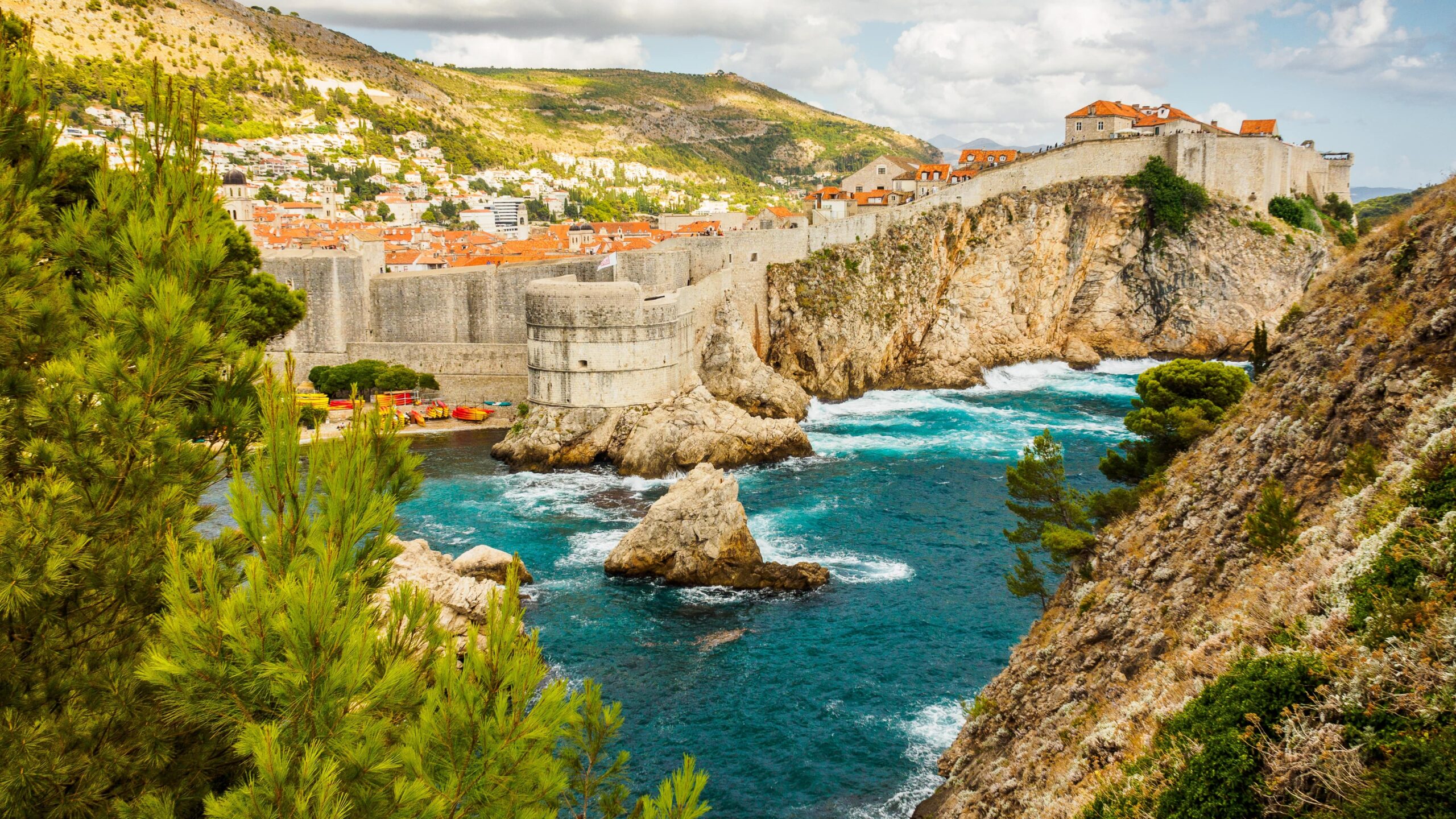